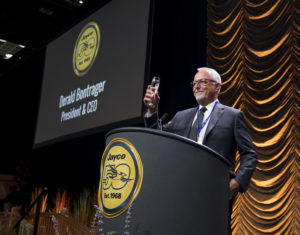 With the company’s 50th anniversary front and center, the 49th edition of its Annual Jayco Dealer Homecoming got underway Monday (Aug. 12) at the Indiana Convention Center in Downtown Indianapolis with more than 400 employees, dealers and their families in attendance. (To view a slideshow scroll to the right side of the RVBUSINESS.com home page. Photos by Shawn Spence).

The three-day Dealer Homecoming event began in 1969 as an employee potluck. The next year dealers were invited to attend, and it has evolved into what it is today: an opportunity for Jayco and its dealer partners to come together in a setting that is equal parts fellowship and business. New model year products are unveiled and ordered, dealer achievements are recognized, and longtime friendships are renewed.

During his remarks Wilbur Bontrager, chairman of the Middlebury, Ind.-based division of Thor Industries Inc., reflected on the milestone anniversary for the company founded on the family farm by his father, Lloyd Bontrager.

“When you combine great people, great product and great dealers with common goals and values, and all building to the same vision of ‘Generations of Family Fun’ you get to 50 years before you even know it,” he said.

Picking up on that, Jayco President Derald Bontrager related a story about how his father first began to grow the business. He would tow one of the fledgling company’s folding campers with his patented internal lift system to a prospective dealer, and tell him to take it and pay him once he sold it.

“I tell you that story to say he believed in people. He believed that people would always do the right thing,” Derald Bontrager said of his father, who died along with a son, Wendall, in a 1985 plane crash. 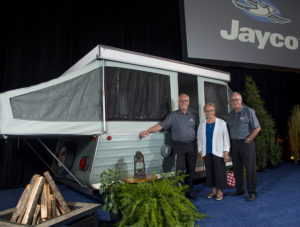 The Dealer Homecoming continues today with more opportunities for dealers to review and order product as well as take pictures with Derald, Wilbur and their mother, Bertha Bontrager-Rhodes in front of a vintage Jayco folding camper – the 40th one ever built. At the same time, dealers will be given two signed books — one on the history of Jayco and the other one written by Bertha titled “Grace for the Journey: My Story of Faith, Family and RVs.”

In addition, Jayco Chief Operating Officer Matt Thompson, who served as the opening night emcee, provided a “State of the Business” presentation. Earlier in the evening Thompson acknowledged the company’s anniversary, telling the audience that “this is a celebration, but it’s just the beginning,” before promising the next 50 years of Jayco would be written with the continued combined successes of Jayco and its loyal dealer partners.

Finally, several dealers were recognized last night for their achievements including Albany RV in Albany, N.Y., part of the RV One Superstores Inc. franchise, for being the overall sales volume leader. Also, Town & Country RV Center in Clyde, Ohio, was honored with the Founder’s Award for best exemplifying the spirit and values of the founders of Jayco.