By: RVBusiness|Published on: May 31, 2012|Categories: Today’s Industry News| 0 comments 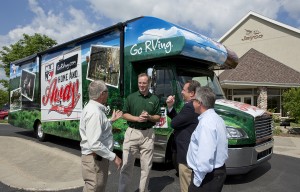 The Go RVing and MLB Network’s “Home and Away Tour” Jayco Seneca Class C motorhome stopped by Jayco Inc.’s headquarters in Middlebury, Ind., Wednesday (May 30) on its way from a St. Louis Cardinals’ game to the Tigers’ stadium in Detroit.

Wilbur Bontrager, CEO of Jayco Inc., and Derald Bontrager, president of Jayco, were there to greet James Ashurst, vice president of public relations and advertising for the Recreation Vehicle Industry Association (RVIA), and Stephen Connors, director of Midwest Advertising Sales for the MLB, as the Seneca rolled into the parking lot.

“We’re always happy to help promote Go RVing’s message and this opportunity was a fun way for us to participate.” said Derald Bontrager. “It was a win for Go RVing, the industry and Jayco.”

Since April 12, the Jayco Seneca 37RB Class C motorhome has been visiting the nation’s ballparks as a touring studio broadcasting features during the MLB Network’s Game of the Week. The Jayco Seneca was used inside and outside for on-air reports and interviews with players during the On Deck Circle, the network’s signature show featuring major league baseball highlights and analysis.

There were also teasers and promotional mentions of Go RVing and the “Home and Away Tour” on The Run Down and the MLB Network Game of the Week. This special promotion was inserted as a value-added element to Go RVing’s 2012 agreement with the MLB Network.

The Jayco Seneca, wrapped with visuals from the new Go RVing “Away” national advertising campaign as well as logos for GoRVing.com, MLB Network and Jayco, will end its tour at the Detroit Tigers’ game this Friday against the Yankees.