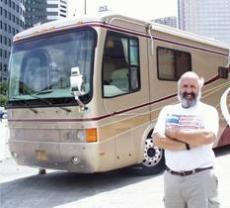 “Hundreds of thousands of America’s RVers travel to tailgate parties every year,” said RVIA Vice President and Chief Marketing Officer Gary LaBella. “For those who aren’t already into it, this show will surely whet their appetites, because no one tailgates better or has more fun doing it than Joe Cahn.”

Cahn canvasses the home team’s most fanatical fans to find the most talented tailgaters to compete in “Tailgate Takedown,” a no-holds barred cooking competition. Cahn introduces the three teams of tailgaters and takes viewers on a tour of their tricked-out RVs for a first hand look at the hard work, creativity, inventive technology and cooking skills that go into one-of-a-kind tailgate creations.

As each team prepares their signature spread, the commissioner will meet other tailgaters to learn about local tailgate tradition and cooking.