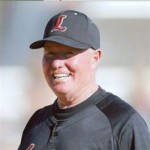 Toolson was born June 4, 1950, to Richard Lynn and Phyllis Mauchley Toolson. On Sept. 13, 1986, he married Ann Major Toolson. Deep love and friendship have been the cornerstone of their lives.

“Toolson was taken too early and will be gravely missed,” the obituary notes. “He would want us all to remember the happy times and laughter.”

Raised in Smithfield, Utah, his love of sports and local teams began early, playing baseball as a Skyview Bobcat. He then became a Utah State Aggie, following in the footsteps of his sister Lynda and brother Kay. At USU, he was a member of Sigma Phi Epsilon, where he met many lifelong friends.

Toolson was also well known for playing on the Smithfield Blue Sox team, and he continued to play softball and racketball later in his life and stayed active till the end, though his favorite part of working out was always the socializing.

In the last year of his life, Toolson was fully adopted by the Logan High Grizzlies as a volunteer coach for the baseball team, and one of the most avid supporters of the football team. More than a spectator, Toolson was an active friend to all the players and coaches on the team. On Aug. 22, he was honored to have been asked to wear one of the player’s jerseys for the opening Logan High Football game. Although a tad snug, he wore it with joy.

Toolson never met a stranger and added most to his long list of friends. He will be remembered fondly for loving all by his interest in their lives and his incredible memory for details of meetings with others. His friends all knew that though you may be out of sight, you were never out of his mind. He kept his friendships strong and active, whether you lived next door or on the other side of the world, keeping close in touch with friends as far away as Singapore.

After his retirement from the Logan Post Office on Dec. 31, 2014, Toolson continued to expand his love for life, scheduling his time around Logan High games and practices. He was also a member of two coffee clubs, including being honored by being accepted into the famed Bluebird Coffee Club.

He had a special bond with his brother, Kay. They spoke or texted many times each day and enjoyed many years of men’s fishing trips.

Though Toolson’s family jokingly called him the “Zipcode Man” since he was happy to stay near his beloved family in Logan, in the later years of his life he enjoyed fishing trips to Alaska with his brother, Kay, and family trips to Kauai with Ann.

Toolson was taken too early and will be gravely missed. He would want us all to remember the happy times and laughter.

Toolson was preceded in death by his parents and is survived by his wife, Ann; siblings, Kay (Judy) Toolson, Lynda (Peter) Snell, and Jan (Randy) Thalman; and by many greatly loved nieces and nephews and their children.

In honor of his wishes, a graveside memorial service will be held at the Smithfield Cemetery on Wednesday, Sept. 2 at noon. Condolences may be sent to the family atwww.allenmortuaries.net

In lieu of flowers, donations can be made to USU Athletics or Logan High Athletics. To send flowers or a memorial gift to the family of Brent Toolson please visit our Sympathy Store.