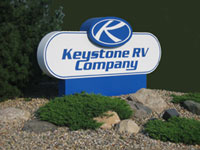 The company, which builds recreational vehicles, advertised that it was looking to hire 100 full-time employees and threw a “job fair” in conjunction with an open house for current employees. The event went from 9 a.m. to 3 p.m.

“At a quarter to nine we had people lined up to get in,” Loren Schmucker, manufacturing manager, said. “Turnout has been very good.”

Schmucker said that employment ads were not working so the decision to do a “media blitz” was made.

“We adjusted accordingly when the economy went south and we want to get back to full-production capacity,” he said.

Keystone has retained a presence in the recreational vehicle manufacturing industry of eastern Oregon. That’s opposed to Fleetwood Travel Trailers, which closed in March, leaving 253 Pendleton workers out of work.

Schmucker said the positions in manufacturing have a starting pay rate of $13.25, as well as benefits packages and merit raises.

The pay, $4 more than Oregon’s minimum wage, is a rare opportunity in this economy, job seeker Liz Raiston said.

Raiston, a student at Blue Mountain Community College, said she currently works part-time at Starbucks in Pendleton, and was surprised to hear on the radio that Keystone was hiring.

“I just really need another job,” she said. “It’s kind of hard to find (a job) in Pendleton.”

“Back in Indiana it seems a lot of places are going out of business, but we’re staying strong,” he said. “With Fleetwood shut down, there is an opportunity (here in Pendleton).”