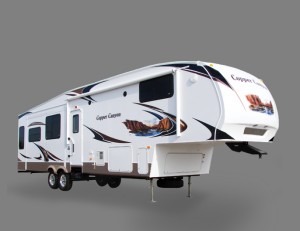 “We were swamped with dealers from the start of the show until the closing bell,” said Matt Zimmerman, Sprinter group general manager, in a news release. “This was the first opportunity many of our dealers had to see the many changes we have made to the line. Response was tremendous. So good, in fact, that we wrote 10-times the orders compared to Louisville last year.”

Completely redesigned from the ground up, Copper Canyon incorporates weight-saving technology to create a lighter fifth-wheel with more features without increasing cost. In addition, new exterior graphics, new interior colors and décor, new raised-panel cabinetry and six new floorplans round out the many improvements.

In commenting  on dealers’ reaction to one of the new Copper Canyon floorplans, Chad Enyeart, Sprinter product manager, said, “The 324FWBHS with the ‘Utility Room’ was a huge hit. Dealers are looking for an edge over their competition and this floorplan gives them that edge. There is nothing else like it in the marketplace. Will it become the ‘must have’ feature this selling season? Many of the dealers who visited with us at Louisville think so.”

The 324FWBHS Utility Room is essentially a separate interior storage room located between the rear bunk room and kitchen. The room can serve as a large pantry and a place to store large, bulky items. According to Enyeart, “Dealers consistently told us that the ‘Utility Room’ feature is both innovative and practical. Inside storage in an RV is invaluable and this floorplan delivers more than any other fifth wheel floorplan on the market today.”

Keystone RV is the nation’s largest producer of travel trailers and fifth-wheels, with manufacturing facilities at its headquarters in Goshen, Ind., and Pendleton, Ore. Keystone is a subsidiary of Thor Industries Inc.