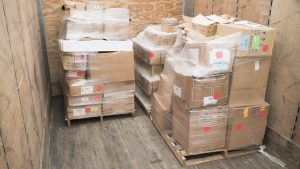 Bloomington, Minn.-based KING, a leading manufacturer of mobile satellite TV antennas, recently made a donation to the robotics program at a community and technical college in Northwestern Minnesota.

Earlier this month, KING donated several pallets of parts used for past products, prototyping and product development to the Robotics Program at Northland Community and Technical College in Thief River Falls.

Pauline Jennings, head of KING’s purchasing department, inspired her team to come up with a way to increase storage space in the Bloomington facility, while recycling obsolete parts for reuse by the robotics team at Northland College.

“We did a review of obsolete parts, sorted through them, saved some for our service department, and the balance of the parts were donated to the school,” said Randy Nelson, director of purchasing. The donation includes electronic, mechanical and hardware parts.

Most of the parts were specifically designed and made for KING. The company hopes that the robotics team is inspired to incorporate these components into their own innovative designs.

The robotics team at Northland Community and Technical College hosts an annual VEX Robotics competition, at which regional high schools compete to win a trip to the national championship in Anaheim, Calif. Visit www.northlandcollege.edu for more information.

The donation is the latest example of KING’s commitment to supporting others, the release stated.  Earlier this year, KING partnered with Camping World Inc. and the Make-A-Wish Foundation to give four families each a Jayco fifth-wheel and a KING Tailgater satellite antenna.

In 2015, a Texas RV dealer reached out to KING to help make a year-long road trip across America possible for a Texas family with two boys with Duchenne’s Muscular Dystrophy. The company donated a KING-Dome in-motion satellite so the brothers could watch their favorite programs during the trip.