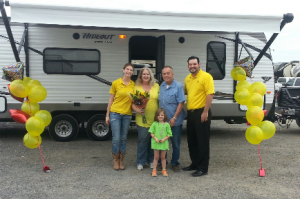 KOA managers Mr. and Mrs. Ralph Adame of the San
Antonio, Texas, KOA (in yellow) present a new Keystone
Hideout RV to winners Vikki and Ralph Wright and their
granddaughter at Sequin RV

According to a press release, Wright was “beside herself” after hearing the news. Her two adult sons weren’t so sure.

“They figured it was too good to be true, so they didn’t get excited until we actually pulled out of the dealership and onto the highway with our new Keystone RV,” Wright said.

Wright and husband, Ralph, are getting ready to enjoy their retirement in their new ultralite trailer.

“Camping has always been my favorite thing,” said Wright. “I could never convince my husband to give it a try, but now he’s all for it. Campers are all so friendly and inclusive, I know he’s just going to love it.”

The Wrights received their new RV recently during a presentation at Seguin RV near their home in Sequin, Texas.

KOA and Keystone RV are already planning to give away another recreational vehicle in 2015. Visit www.KOA.com for more details when they become available.