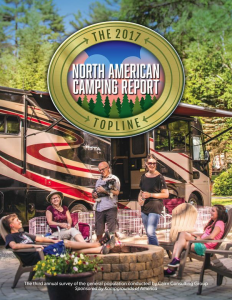 There’s no question that growth in camping is one of the biggest themes in the 2017 North American Camping Report, released today (March 14).

Generation X and Millennials are driving a lot of growth in camping in general, but also in family camping, group camping and minority camping, according to the report, which was commissioned by Kampgrounds of America Inc. (KOA) but which looks beyond KOA guests to all campers across the U.S. and Canada.

In fact, since KOA first commissioned Scott Bahr of Cairn Consulting Group in 2014 to start gathering detailed data on North American campers, the number of camping households has grown by 3.4 million, according to KOA Chief Franchise Operations Officer Toby O’Rourke.

“That’s a sizeable number and in the last year we’ve spent a lot of time looking at the million who came in last year. The themes with that group are definitely yonger; it’s largely being driven by Millennials. There is also a lot of GenXers coming into camping as well,” O’Rourke told Woodall’s Campground Management.

“We’ve seen a 36% increase in the number of people taking three-plus stays a year. That’s my favorite thing to come out of the research. That is absolutely being driven by GenX. That is a really promising statistic for our industry: More people are camping more frequently,” she said.

As the camping base grows younger, it also grows more diverse, O’Rourke told WCM. “We’re seeing sizeable numbers of African Americans, Hispanics and Asians,” she said, and the camping base is starting to mirror the general population more closely.

“There are also more families. There’s a huge increase in the numbers of people camping with children, which is also extremely promising for future growth of our business,” she pointed out. 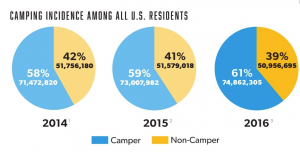 “This year’s survey of Generation Z teen campers demonstrates that teens are highly enthusiastic about camping. Not only are they happy to go camping and place a great deal of importance on getting outside and being active,” the report says, “GenZers are seeking more camping experiences and enjoy participating in the trip-planning process.”

Overall, O’Rourke said, that teen enthusiasm lays a long-term foundation that supplements the short-term fundamentals that are positive for the camping market.

“We see a lot of optimism to camp more coming from Millennials and GenX, which points to more camping,” she pointed out. “If we’re going to see any decrease, it’s those in the older age groups who are going to camp the same amount or possibly less, because they’re aging out. It’s not substantial enough that I’m worried about it. There are so many Baby Boomers entering the market each year, and they’re still camping a lot. Those are still really healthy numbers.”

For a look at some of the other findings in the report, click here. The report is available by clicking http://koa.uberflip.com/i/794160-2017-north-american-camping-report/.