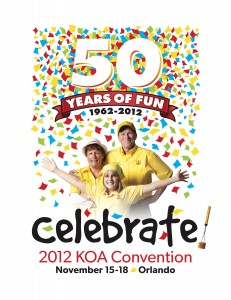 The largest attendance in its history and the biggest expo on record are two of the goals for the annual Kampgrounds of America (KOA) Inc. convention scheduled for Nov. 15-18 at the Gaylord Palms Resort and Convention Center in Orlando, Fla.

Woodalls Campground Management reported that the convention takes on added significance this time around as it formally marks the franchise’s 50th anniversary, the theme of which is “Celebrate 50 Years of Fun.”

“We expect our largest convention yet,” said Jenny McCullough, director of training and events. “We’re expecting about 600 attendees this year. So far, we’re on track for a great convention. We have more people signed up now than we ever had at this point.”

Along with a multitude of industry-leading learning opportunities and fun, the convention will feature the KOA Expo, including more than 130 vendors offering special products to attending KOA owners and managers, as well as the annual KOA Care Camps Charity Auction to benefit these special summer camps for children with cancer.

A good attendance would be consistent with KOA pronouncements that the camping business has been strong this season across much of the U.S. and Canada.