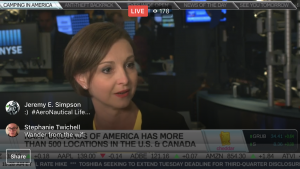 As Kampgrounds of America Inc. (KOA) prepares to release its 2017 North American Camping Report at the end of this week, Chief Franchise Operations Officer Toby O’Rourke and Vice President of Communications Mike Gast are on a media tour to draw the general public’s attention to the growing popularity of camping and RVing.

O’Rourke appeared Monday (March 13) morning on Cheddar TV, a live and on-demand television service that broadcasts from the floor of the New York Stock Exchange, where O’Rourke teased some of the information of the upcoming report.

When the 2017 North American Camping Report is released Wednesday, RVBUSINESS.com and Woodall’s Campground Management will post details from the report plus an exclusive perspective from O’Rourke and Gast and a link to the full summary of the 56-page comprehensive report — now in its third year — which explores the attitudes of all campers, not just KOA guests. The report is put together by Scott Bahr of Cairn Consulting Group.