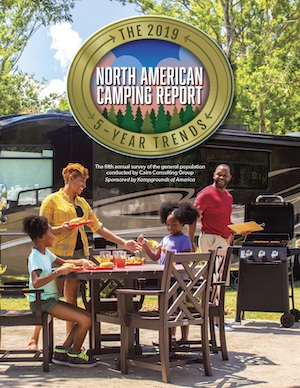 Until fairly recently, the outdoor hospitality industry has tended to function on anecdotal data — a combination of limited research, networking and personal experience. Within the past few years, however, a number of companies have mined customer feedback through a number of mediums — especially social media — in an attempt to more fully understand what consumers are looking for and to fine-tune their operations.

Easily the most comprehensive of these efforts is the now annual North American Camping Report commissioned by Billings, Mont.-based Kampgrounds of America Inc. (KOA). Now in its fifth year of reporting on trends in the campground and RV park sector, the 2019 North American Camping Report underscores how camping continues to grow among consumers — especially families and Millennials — as a popular and affordable form of outdoor recreation.

“There has also been a significant increase in the number of people that camp every year,” Toby O’Rourke, KOA’s newly minted CEO told WOODALLSCM.com (WCM). “Over the past five years we have seen a 22% increase in those numbers and a 72% increase in campers that plan on camping more than three times a year. I think it really just speaks to the fact that camping is becoming an active part of people’s lifestyles.”

Commissioned by KOA and released in late April, the report goes beyond surveying only KOA’s guests at its more than 500 franchise locations across North America and queries a wide cross-section of Americans and Canadians on their habits when camping. Administered by Scott Bahr of Cairn Consulting Group — who has compiled the past four reports — O’Rourke noted that the survey data is starting to also show that the diversity of campers is growing as more multicultural groups are camping.

“This is a big shift over the past five years,” explained O’Rourke. “We are seeing some really large increases in the number of diverse groups that are camping.”

The report has also begun to show the many life events or stages that determine how people camp and why they camp.

“I feel like there’s different triggers that get people to camp,” O’Rourke noted. “They might be trying different types of accommodations. They might be deciding to purchase an RV when they become a family. We do see purchases of tents increase when people become families.

“Similarly, when asked what’s the major lifestyle trigger that gets you to camp more, with Baby Boomers, that (trigger) is retiring,” she added. “So, there are triggers — coming into more income, having children, being exposed to different places based off influence of family and friends — that have an impact on how people camp.”

Other takeaways from the report:

• 60% of campers, overall, identify as tenters; however new campers are reporting that they are less likely to stay in tents, with nearly 60% staying in cabins, RVs or some other form of accommodation.

• “Van Life” is starting to emerge as a camping style that involves a smaller, motorized Class B RV. The lifestyle is highest among African American campers, up 12% to 22% in 2018, while Hispanic campers (58%) are most likely to seek an RVing experience.

• Couples with children are most likely to own or use an RV (29%), according to the report, with 36% saying they are likely to purchase a motorhome in 2019.

• Peer-to-peer rental services are expected to still see good traffic over the next year as six in 10 non-RV owners say they would consider renting from such a service, with younger campers saying they would explore that option before buying an RV.

• Four in 10 campers say that site quality and type are key factors in selecting a campground. A campground’s atmosphere is also key, with 24% of campers saying that plays a role in the park where they will choose to stay at, while 22% say location is also a factor.

• The 2019 report indicates that campers are less likely to go online while camping and 48% of campers say that technology detracts from their enjoyment of camping.

• Even among teens, the importance of Wi-Fi and Internet access while camping has declined from 37% in 2017 to 29% in 2018. However, when pressed, 80% of teens indicated that they go online one or more times per day while camping and nearly half go online more than four times.

A continued theme for the past five years has been the growth in Millennial campers and the impact they have on the outdoor hospitality industry. Millennials continue to remain in the driver’s seat when it comes to growth in the campground and RV park sectors, with 41% of campers identified as Millennials (born between 1981-1997) and 36% of campers part of Gen X (born between 1965-1982).

Fifty-two percent of camping households include children, which is a number O’Rourke noted had increased significantly in the past five years. She explained that the positive impact camping has on teens and younger children is evident as they start thinking about families of their own in the future, as 90% of teen campers say they plan to camp as adults.

“We have been surveying teens for a couple of years now and I think we are seeing some really good things that jump out — that they enjoy camping and that they want to do it when they are adults,” O’Rourke explained. “I think in the long run that’s how we form these lifelong campers.

“What we are seeing in our data is more and more people are identifying as lifelong campers, probably because they’ve been introduced to that as a child and they enjoy it,” she added.

Younger campers also credit family influences for their interest in camping (50%), according to the report.

“Families are a very big trigger,” noted O’Rourke. “Children want to continue to camp as they grow older, so it’s a really natural way that people start camping.”

The report also indicates that adults are beginning to gravitate toward wanting their children to enjoy the outdoors more — and that camping is a natural way to do that.

“Most companies spend a lot of time marketing to adults, but children are increasingly influencing travel decisions,” said O’Rourke. “Kids want to camp — and if there is a way to reach kids or expose them to RVing and camping through different channels, that is important for our industry to do so.”

Camping also is viewed as an economical option for a quick getaway or vacation, according to the report. A majority of campers still consistently come from the middle-class to lower middle-class segments of the population, with 68% of all camping households making an annual income of $74,999 or less.

“Camping is becoming more accessible to people and they are enjoying it,” O’Rourke pointed out. “That is spanning across all demographics and among different age groups. There are a lot of different ways and places to camp and that makes it an affordable option for many.

“That is something that hasn’t seen major shifts over the past five years,” she continued. “I think if we broke that down by type, we might see some differences, like in individual camping styles, but again I think it just highlights the affordability of camping.”