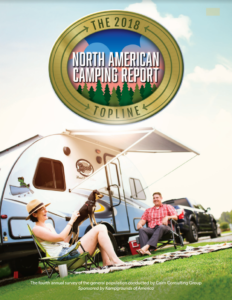 More than 6 million new North American households have adopted the camping lifestyle since 2014, with the number of campers who camp three times or more each year – the most avid group of campers – having increased by 64%, according to results from the 2018 North American Camping Report. The annual independent study supported by Kampgrounds of America Inc. (KOA) offers evidence that camping is fast becoming a lifestyle attribute among U.S. and Canadian households – and there is no indication that this trend is slowing down.

Increases in camping – both in reach and frequency – can be tied to increased accessibility of camping due to the removal of previously held beliefs and barriers. While previous research demonstrated bugs, safety/security and/or campers not knowing anyone who camped as primary barriers to camping, those barriers are waning with technology and social media serving as access portals to helpful information both prior to and during the camping experience. Further, according to campers who say that access to cell or Wi-Fi service has a great deal of impact on the length of their trips, they are able to take almost a full week extra of time camping.

“Camping is a highly social activity, and with that, we are seeing campers turning to their social circles or other camping influencers for information and resources, including borrowing or renting RVs and gear. It’s this social nature – both on and off the campground – that continues to reduce barriers and fuel the growth of annual camping in North America,” said Toby O’Rourke, president of KOA. “With reduced barriers and the desire of campers to connect with nature and each other, it is no surprise that camping is fast becoming a fundamental component of an outdoor lifestyle.”

The 2018 North American Camping Report continues to show campers view camping as a time to relax, escape stress and clear their minds. Even with an influx of new campers (both younger and more ethnically diverse), differences in opinion about the reasons for camping are beginning to lessen, with close to half of all campers suggesting that camping has “a great deal of impact” on reducing stress and allowing them to spend more time with their families. There is also increased recognition that camping contributes to emotional and physical health.

Key findings and trends based on the results of the 2018 North American Camping Report include:

• Camping continues to grow in the U.S. and the future of camping is strong.

• Overall camping incidence remains stable with 61 percent of U.S. households (77 million) having someone who camps at least occasionally, a minor increase over last year. 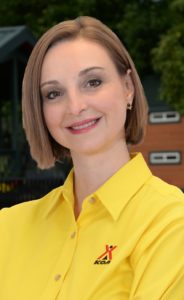 Nearly all of the teen campers surveyed claim they intend to camp as adults, and if they have children, they intend to bring them camping. In fact, most teen campers identify a benefit of camping as relaxing the adults in their lives (as well as themselves).

Further, new campers in 2017 are more diverse than the overall population with a nearly even split between white and non-white campers.

Those who serve the outdoor hospitality sector should plan on higher levels of camping across the board, but primarily among younger campers who may drive the camping economy as they experiment with different types of accommodations and camping.

Six out of every ten Millennial households tried some type of camping or lodging in 2017, but the experimenting is being driven by Hispanics (71%) and African Americans (78%) trying out new ways of camping.

Nearly all Millennials (93%) and Gen Xers (93%) would like to try some type of new camping in 2018. Millennials are the most likely to want to experience backcountry camping and/or glamping, while Gen Xers seek unique accommodations. Both Millennials (66%) and Gen Xers (58%) are changing their camping habits and included both more weekends and weekdays in their trips this past year.

A past determinant of camping has been having access to information about some of the issues that may have hindered camping in the past, such as safety and security. These issues can now be addressed with social media networks and searching the internet, putting information at the prospective camper’s fingertips.

Nearly all campers (97%) state that they bring some type of technology with them while camping.

What’s more, the idea of “unplugging” while camping is in fact unlikely to mean a complete disconnect from technology. About a third of all campers saying they have their smartphone with them, but they don’t turn it on (used for safety only).

The use of social media to share photos and videos while camping continues to grow, with 27% of Millennials and 25% Gen X campers saying that sharing camping experiences through social media is important (compared to 24% of all campers).

Millennial families are more likely than other millennials to post a status update via social media (40%), check-in (40%) and share photos or videos (68%) while camping.

Differences in how campers camp

Among campers who claim an RV as their primary way of camping, 44 percent do not own the RV they use most.

A full one-fourth of this subset of campers say they borrow the RV, and 1-in-5 say they rent from a company or peer-to-peer rental service.

Borrowing an RV is most common among Gen Xers.

Among millennials, those with families are most likely to consider renting an RV from a peer-to-peer service (followed by millennial couples).

Among new campers in 2017, one-fourth camped in cabins – a rate much higher than last year (moving ahead of RVs as the primary way of camping). This could be due at least in part to the large influx of non-white campers in 2017, many of whom not only start camping in cabins, but are also likely to express a preference for cabins.

A full digital copy of the 2018 North American Camping Report is available for viewing or for download on the KOA Pressroom at www.koapressroom.com.