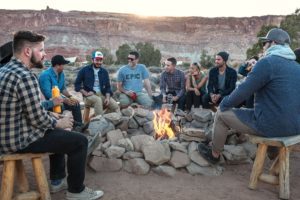 Campground owners need to be willing to embrace technology at their campgrounds, but how campers use that technology while camping may be shifting, according to the 2018 North American Camping Report commissioned by Billings, Mont.-based Kampgrounds of America Inc. (KOA).

The report indicates that 93% of campers bring some form of mobile device with them on camping trips, while one-fourth of all campers “say it is important to them to share their experiences on social media.”

Wi-Fi is also becoming an “expected amenity,” according to the report. “Four-in-10 camper households overall say access to cell service or Wi-Fi impacts the amount they camp.”

But tides are shifting on how important technology is to the overall camping experience, KOA President Toby O’Rourke told Woodall’s Campground Management (WCM), sister publication to RVBusiness. In 2017, over half of Millennials (52%) said that technology distracts from their overall enjoyment of camping, up from 38% in 2016.

“We’re seeing more and more people saying technology is a distraction from their overall enjoyment while camping, but they are still bringing their technology while camping and they’re using it as they need it,” O’Rourke said. “These devices are becoming more of a utility it seems. You don’t do anything without your phone.

But, it’s not like they’re going camping and sitting there and using that phone as entertainment while they’re camping,” she continued. “They are camping and enjoying the outdoors, enjoying their time engaging with friends and family, and that’s the experience. I think people are so connected all the time that we are seeing people get outside and want to just be outside.”

She added that it is still important to have the right infrastructure in place for when campers do want to use their phones.

“Access to technology brings information to a prospective camper’s fingertips,” stated the report. “Answers to their questions are as close as a Google search and help, should they need it, is often just a call away. Easy access to technology, and especially mobile devices, also puts their minds at ease regarding safety, allowing them to more fully enjoy their outdoor experience.”

The report goes on to say that “unplugged” while camping rarely means that campers are completely disconnecting from technology. Only 1-in-10 say that unplugging means no access to any technology.

“When asked how they ‘unplug’ while camping, about a third of all campers say that they have their smartphone with them, but they don’t turn it on,” the report says.

A full digital copy of the 2018 North American Camping Report is available for viewing or for download on the KOA Pressroom at www.koapressroom.com.