By: RVBusiness|Published on: May 15, 2019|Categories: Today’s Industry News| 0 comments 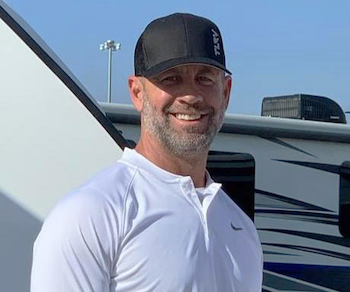 According to a press release, Krzyzanowski started his professional career with the Marine Corps where he served the United States for 10 years. In 2001, he began a new career path in RV industry sales with Lazydays RV in Seffner Fla., followed by a two-year stint as general sales manager for two years at one of the largest Camping World locations in the country.

“I’ve known Donnie for over 15 years, and I’ve watched him grow in the RV industry. His relationships and work ethic are unmatched. Our team at Travel Lite is very fortunate to have Donnie as part of this winning team,” said Ryan Rebar, vice president of sales for Travel Lite RV.

“Getting to know Donnie has been inspiring, and a real pleasure. Simply put, he is a genuinely great person. The kind of father that brings his daughter along while on the road training his dealers. These are the family values that we strive for at TLRV, and he truly lives it,” said Dustin Johns, owner of Travel Lite RV.