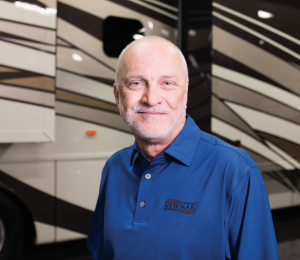 Industry insiders are expressing “shock” at news of the passing Thursday (Jan. 26) of Kyle McCrary, the 61-year-old director of product planning and design for Nappanee, Ind., motorhome builder Newmar Corp. who had been facing serious pulmonary issues since last summer.

McCrary, through his sense of humor, earned the appreciation of a lot of people with whom he’d worked over the years in a career launched at Blue Bird Wanderlodge, a famous motorhome brand once based in Fort Valley, Ga.

But McCrary, for those who know what goes on behind the scenes with the development of a motorhome from the tires to the antenna, had built a reputation over the years as the virtual “dean” of motorized product design at Blue Bird, Fleetwood Enterprises Inc.’s American Coach division and, since 2002, at highline manufacturer Newmar, where he maintained a firm hand in the development of all of Newmar’s 10 motorized lines.

“Nobody knew the RV business, especially the higher-end RV business, better than Kyle,” noted Newmar Chairman Dick Parks, whose first contacts with McCrary date back to when the two were colleagues at Fleetwood. “We’re going to miss him, that’s for sure.”

“I really don’t know anyone else in the industry that did the type of development he did,” Newmar President Matt Miller told RVBUSINESS.com. ”He was such a beloved and unique person. We’re going to miss him immensely. He’ll leave a huge hole in Newmar, not just from a business standpoint. We miss him as a person already.”

“He was always involved in product planning,” added Newmar Vice President of Sales and Marketing John Sammut, another Fleetwood alum. “He was not directly involved in sales, but he always had a knack for product, particularly high-end luxury products. He had a keen sense for what the high-end luxury customers were looking for and was able to incorporate that into the product for which he was responsible.”

Having first met McCrary when the two were competitors back in the later 1980’s, Pat Terveer, now general manager of Forest River’s Coachmen Class A’s, said he got to know McCrary at FMCA rallies and other shows when McCrary was with Blue Bird and Terveer was a sales executive for American Coach. The two ultimately became co-workers and fast lifelong friends.

“Ultimately, I brought him to American Coach,” said Terveer of McCrary, who had remained a permanent resident of Warner Robins, Ga., over the years. “He came in as part of the sales department. Even though Kyle had been in sales in a couple of his positions, he was known as the motorized product guy. He had a great ability to design. He was great with new features, interior and exterior design and basically had his hand in some of the most well-known products that our industry has produced – Blue Bird, American Coach and Newmar among them.”

Services for McCrary, father of a son and daughter with two grandchildren, will take place at the McCullough Funeral Home in Warner Robins with visitation on Jan. 30 from 6-8 p.m. and a memorial at 11 a.m. on Jan. 31.