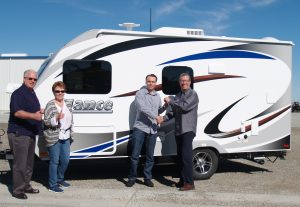 When Dan Burbott answered the phone and was told by Tom Gaither, western show director for 64th Annual California RV Show, that he was the winner of 1475 Lance Ultra-Light Travel Trailer, he thought it was one of his friends playing a joke.

But, according to a release from Lance Camper Mfg. Corp., the Upland, Calif., resident soon realized it was true and he couldn’t believe he was the lucky winner of the camper, valued at $30,376.

Even then, Burbott’s mom, Nancy, came with him to pick up the trailer because she wanted to make sure he really was the winner.

A tent camper most of his life, Burbott said he and always wanted to know what camping would be like in a trailer. Now he has the opportunity to learn how much fun it will be as he plans his first trip to El Capitan Campgrounds and other great parks along northern California.

When asked whether he will be using the trailer often, Burbott said, “Our family likes to share what we each have so I am going to give each of them a chance to experience the fun and enjoyment I will have in this new Lance trailer, but I will make sure I get first choice.”

Bob Rogers, director of marketing for Lancaster, Calif.-based Lance Campers, said, “We are just as excited as Dan and pleased to hand him the keys to our new 1475 Ultra-Light Travel Trailer and welcome him to the Lance family!”

The 14-foot ultra-light trailer weighs 2,560 pounds (unloaded), Rogers noted, making it easy to tow the trailer with an everyday vehicle. The trailer has all the conveniences of larger RVs, like a nice-sized bathroom with shower, kitchen area with a refrigerator, stove, microwave and two large lounge chairs to enjoy that morning coffee. Burbott said he enjoys cooking and these appliances are exactly what he needs for that home-cooked meal.

Burbott filled out an entry form the same day he visited the California RV Show, held annually in Pomona and hosted by the Recreational Vehicle Industry Association (RVIA).