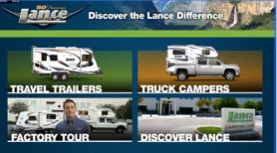 “With 44% of the U.S. population using Apple mobile/tablet products, the IOS version of the Lance product app will allow many more users to take advantage of this awesome tool,” said Director of Marketing Bob Rogers in a press release.

The Lance product app first launched in August of this year for the windows operating system and is the first of its kind in the industry. The app provides the retail salesperson and Lance customers, no matter where they are, the latest information on Lance products and services, and ultimately helps customers “Discover The Lance Difference.”

“Next up for development is the app for use with the Android operating system that currently accounts for around 46% of the mobile/tablet user base,” added Rogers.