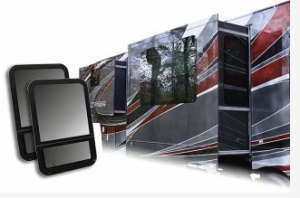 “It’s all about styling with this product line,” said LCI Vice President of Sales Andy Murray in a press release. “Bonded frameless windows create a cleaner, more automotive look and cleaner lines on the outside of the RV while streamlining the sidewall.”

“Initially, the product was a high-end feature, but now it’s used on mid-priced products, and more and more on motorized products,” continued Murray. “In order to support this growing trend, LCI has made significant investments in people, facilities and equipment over the past 12 months.”

Murray said that Lippert dedicated a 130,000-square-foot to frameless window production, which will include its own in-house glass processing and tempering operation.

“It’s the first if its kind in our industry,” he said.

In addition to travel trailer and fifth-wheel RV windows, LCI’s window products include: