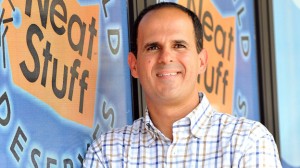 South Florida native Marcus Lemonis had a different kind of homecoming during a visit to Miami.

He left behind his multimillionaire trappings — from credit cards and suits to his chief-executive pay as the head of RV retailer Camping World and Good Sam in Lincolnshire, Ill., — and for six days lived in a roach-infested trailer in Miami’s Liberty City neighborhood. He had $35 for food while he volunteered with three local charities, the Fort Lauderdale Sun Sentinel reported.

The hourlong show chronicles incognito millionaires who are dropped into needy areas where they look for unsung heroes making a difference in the community. At the end of the episode, the millionaires reveal themselves and give the organization money to help their mission.

“To be able to go back to a place that gave me so much is extra special,” said Lemonis, 38, a former Fort Lauderdale AutoNation manager. “That’s part of the city that, as a child and as a young adult, I never got to experience.”

In the show, viewers see him volunteer at National Voices for Equality, Education and Enlightenment, which promotes anti-bullying and anti-violence; New Journeys Transitional Home, which provides housing for young women leaving foster care or facing homelessness; and Neat Stuff, which sells new clothing and school uniforms for needy families.

As Lemonis checked in, he learned about their financial challenges. At New Journeys, the cash-strapped organizer is months behind the home’s mortgage payment. Neat Stuff workers have outgrown their cramped headquarters, where stacks of clothes reach the ceiling.

At each stop, Lemonis also shares part of his back story. Shortly after being born in Beirut, Lebanon, Lemonis was abandoned. At 9 months old, he was adopted by a couple who raised him in Miami’s Little Havana. He eventually graduated from Christopher Columbus High School.

On the show, as he sat in on a workshop with National Voices members, Lemonis revealed how he was so insecure about his weight as a teenager that he became bulimic. He also spoke about being bullied and called nicknames.

“In business, you generally have your guard up,” said Lemonis, noting that the show provided him a chance for self-evaluation and reflection. “You had to really strip it down. That was hard. It was tough.”

By the end of the episode, which was taped last summer, Lemonis presented each group with a handsome check — and in one case an RV and SUV — to further their causes.

Said Lemonis, “The charities that were involved were wonderful and they are the backbone of the show.”