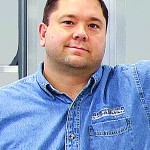 However, Tuttle says he’ll continue consulting for CrossRoads President Andy Cripe on an array of marketing projects as well as product development matters, including ongoing work on the aluminum truck campers, travel trailers and toy haulers being developed through a licensing agreement with Ford Motor Co. in conjunction with the new aluminum-bodied 2015 F-150 pickup truck.

“I made the decision to basically semi-retire,” Tuttle told RVBUSINESS.com. “You know, it’s been a couple years since I sold Livin’ Lite to Thor. I’ve been working with Ryan Spencer, who’s basically my replacement, for about six months now, and things are going well. Thor has moved Livin’ Lite from Wakarusa up to Topeka as part of their whole campus there. They’ve been able to consolidate a lot of things, and they’re seeing a lot of efficiencies in manufacturing and all that.

“So, there’s a lot of good things going on,” he added. “I am going to continue to help with the Ford project to get that across the finish line. The truck camper is completely done. The travel trailer is almost done, and the toy hauler’s right behind it. So, I think we’ll have all three of those at Open House. I am going to stay around on a consulting basis. I’m going to help not just with the Ford project, but I’m going to be consulting with the whole CrossRoads division, and anything to do with marketing, and helping them to do their websites because there’s a lot of marketing and advertising that they’re in the middle of.

“But I’ve got other interests outside the RV industry that I’ve been fortunate enough to be able to invest in over the years and some of those projects could really use my attention.”

Tuttle’s main interest outside the RV industry, aside from fiancé Kami Geyer to whom he’s getting married Sept. 6, is a faith-based, non-profit project in which he got involved in 2008 after he left his position with Elkhart, Ind.-based Heartland Recreational Vehicles LLC, a company he co-founded that’s now also a Thor division. A collaboration between the North Central Indiana Teen Challenge and the Life Center Project aimed at combating the effects of substance abuse and poverty among Elkhart County families, Tuttle’s non-profit project at least partly involves a residential recovery facility at the former Miles Laboratory property off Bristol Street on Elkhart’s north side.

So, his industry peers wonder, is Tuttle, who started Livin’ Lite in 2003 and sold it to Thor in September of 2013, altogether done with the RV industry? “I don’t have any plans to do anything in the RV industry, that’s for sure,” said Tuttle, a serial entrepreneur known for inventive product development and multiple startups.