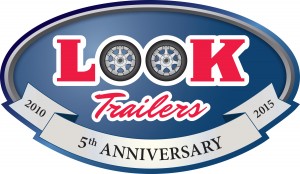 Middlebury, Ind.-based LOOK Trailers, a leading cargo trailer manufacturer, is marking its fifth anniversary. Over the past five years, LOOK Trailers has transformed from a startup company into a successful manufacturer with four locations and over 400 dealers across the U.S. and Canada.

According to a press release, LOOK Trailers was founded in February 2010 with the vision of “being the best, not the biggest, trailer manufacturer in the industry.” Maintaining that focus, in its first five years the company has grown to become the second largest enclosed cargo trailer manufacturer in the nation according to Statistical Surveys Inc.

Matt Arnold, owner of LOOK Trailers noted, “I would like to thank all of our dealers and employees for their support, hard work and dedication to make these first five years a success. In the past year, we have been recognized for our many successes but I am truly grateful to have been able to share those accolades with my father, Mike Arnold, who passed away in August of 2014.

“He constantly challenged me to take the difficult road and build a company with four divisions in fewer than four years coming out of the worst recession in my lifetime. I look forward to continuing to grow, innovate, and broaden our product line while offering outstanding service to our customers.”