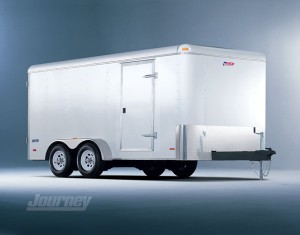 In what can be taken as another signal that northern Indiana’s manufacturing hub is recovering from the recent economic malaise, Look Trailers over the next year or so plans to add 100 people to its 120-member work force to build Pace American and Look cargo and utility trailers in Middlebury and its factories in Utah, Georgia and Arizona.

Look founder and President Matt Arnold told RVBusiness.com that he saw opportunity in bringing back the high-end Pace American brand even as the cargo trailer market was off 5% in 2011 compared to a year earlier.

”This gives us an opportunity grow in Indiana where we were at capacity in our Look factory,” Arnold said. ”And for us as a company — particularly in the other locations where we’ve got additional capacity — we can add the Pace American line and continue to grow.”

According to Statistical Surveys Inc., Look had the greatest percentage market share increase in the cargo trailer segment in 2011.

Look intends to bring back a majority of the Pace American models, including Cargo Sport, Summit, Shadow, Pursuit and Midway brands that were put on the shelf by Sun Capital prior to the shutdown.

Pace American trailers, with MSRPs starting at $1,250, will be a little more upscale than when they were being built by Sun Capital.

”We are taking the product and making it what it was prior to the Sun Capital purchase,” said Marketing Director Tom Holt. ”We are updating the frames and using stronger material so that the trailers will last longer.”

Look began building Pace American products in Middlebury in mid-January while the company was leasing the factory from the bank that took it over when Sun Capital took Pace American into bankruptcy.

Arnold said there is room in the cargo-trailer sector for a higher end unit.

“There are products out there that are as cheap as can be,” Arnold said. “We are going to be building a high quality trailer because customers are realizing that just because it’s real cheap doesn’t mean that it’s a value. That give us an opportunity to build a quality product that will appeal to the marketplace.”