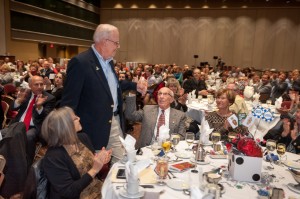 Haag, 82, had not attended an LSI symposium since 2004. But he mingled with Jellystone Park franchisees from the U.S. and Canada who gathered for the Nov. 11-13 annual symposium and trade show at the Embassy Suites and Northern Kentucky Convention Center in Covington, Ky.

“He was treated like a rock star,” said Michele Wisher, LSI’s director of marketing, in a written announcement about Haag’s visit. “He brought copies of the original brochures from his first park in Door County, Wis., and autographed them for our franchisees.”

In an interview, Haag said he was extremely pleased with the growth of the franchise network, its impact on the campground business and especially its impact on families.

“These parks were unique in the beginning because they were destination parks,” Haag said. “Now, we have second, third and fourth generation people staying at these parks because that’s what their parents did.”

Haag said there is nothing more satisfying for him than to hear of families that have two, three and, in some cases, four generations of campers going back to the same Jellystone Park, year after year.

But the rapid growth and success of the Jellystone Park chain eventually took its toll on Haag, who left the franchise network after six years of explosive growth.

“I sold 85 franchises,” he said. “I crisscrossed the country, going back and forth from the East Coast to the West Coast. It got to the point where I had three kids at home and I was gone all of the time.”