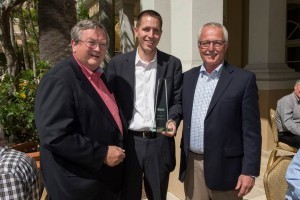 Bowersox, who has been with IMHA-RVIC for more than 12 years, is leaving IMHA-RVIC to take a position with the Manufactured Housing Institute.

“Mark certainly leaves the association in a lot better position than when he started,” Eckstein told RVBUSINESS.com. “He’s helped direct us through some of the toughest years in the history of the industry. He’s moving on to bigger and, hopefully for him, better things. Nobody’s irreplaceable, but Mark’s shoes will certainly be very difficult to fill.”

Bowersox began as the association’s RV Director before adding marketing director duties. He has served as the IMHA-RVIC executive director since Jan. 1, 2010.

“Mark became executive director in 2010 when both the manufactured housing and RV industries were struggling, and our association reflected the difficulties of the industries. In Mark’s tenure, our organization has increased its membership, financial reserves and impact with lawmakers. We appreciate his efforts and we believe that IMHA-RVIC is well positioned for success moving forward,” said Eckstein, who is owner and chief operating officer of Mount Comfort RV in Greenfield, Ind.

IMHA-RVIC leadership has a created a search committee to identify the organization’s next leader, and Eckstein said they hope to have a successor in place by Bowersox’s last day.

“But I think it’s more important to get a quality person than it is to get somebody fast. The goal will be the search committee will come up with some candidates and then the Executive Committee will make the hiring,” Eckstein told RVBUSINESS.com.

Established in 1945, IMHA-RVIC is a 501(c)(6) nonprofit trade association based in Indianapolis. The association now has more than 375 members from all segments of the manufactured housing and RV industries, is financially sound and has a committed staff.

Candidates interested in the executive director position can request more information or submit a cover letter and resume by Aug. 28 to [email protected] or by fax at 317-243-9174.