By: RVBusiness|Published on: May 9, 2018|Categories: Today’s Industry News| 0 comments 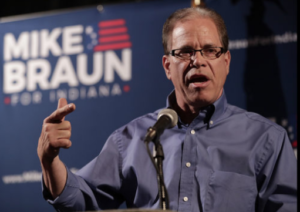 Indiana Republicans who picked wealthy former state lawmaker Mike Braun as their Senate candidate now are hoping he’s not too battered from a grueling primary to mount an effective challenge against a vulnerable Democratic incumbent. Braun is president and CEO of Jasper, ind.-based Meyer Distributing, a parts distributor to the auto and RV industries.

The Associated Press reported that President Donald Trump and Vice President Mike Pence have scheduled a campaign rally on Thursday (May 10), just two days after the primary, signaling a push to stir GOP unity behind Braun ahead of his fall campaign against Sen. Joe Donnelly. That visit, in Elkhart, near Donnelly’s home turf, will be followed next week with another visit to the state by Pence, Indiana’s former governor.

“It’s still a very Republican state. But anytime you have a divisive primary, it’s going to obviously help Donnelly,” Republican Indiana donor Bob Grand said during a recent interview. “You can count on the fact that Vice President Pence will do everything he can to bring us all together.”

Braun didn’t seem to show any concern Tuesday night while basking in the glow of supporters after his double-digit victory over two congressmen – Todd Rokita and Luke Messer.

Braun said his victory is a sign voters are disenchanted with “business as usual” and pointed to several other Republican “outsider” senators who entered politics from the business world.

“If we get enough of us there, I think we’ll actually start to solve some of these issues that have been vexing politicians,” Braun said.