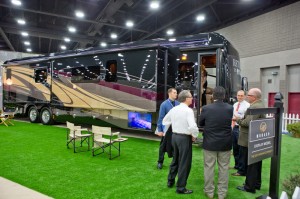 “We’ve been thrilled to receive noteworthy accolades from the RV industry ahead of the official public debut of the all-new Dynasty,” Mike Snell, president of Monaco, said in a press release. “The Dynasty truly reflects the essence of the Monaco brand and the power, luxury and elegance that is Monaco’s legacy.”

With the introduction of the Dynasty, the Monaco brand is igniting “a return to power,” Snell said. The Class A motorhome features an all-new Roadmaster chassis supported by Freightliner Custom Chassis Corp., which provides a 600-hp, big bore Cummins engine.

The redesigned Dynasty is also a return to classic, traditional styling as the model continues its legacy as Monaco’s most luxurious motorhome. “Everything from floorplans to features has been designed with input from Monaco owners, making the new Dynasty a true reflection of luxury RV owners’ wants and needs,” said Snell.

The Dynasty interior offers a spacious master bath that features innovative touches such as LED lighting and a large, enclosed shower with glass doors and 6 foot 5 inch showerhead height, and hand-crafted hardwood cabinetry. Other features throughout the galley include built-in storage areas, custom utensil drawers, an appliance garage and innovative hideaway coffee valet.

The 2015 Dynasty will shown at display area No. 610 at the Florida RV SuperShow.