By: RVBusiness|Published on: May 5, 2018|Categories: Today’s Industry News| 0 comments 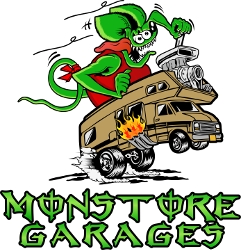 MonStore Garages, the brain child of David Gandolfo, began construction last year on 40 garage condominiums designed for RVs and other large vehicles in Palm Springs, Calif.
“There is a definite gap in the market for the individual who’s needs are more than just a home-sized garage for all of their possessions,” Gandolfo said in a press release. “Those with RV’s or collector cars have long needed a place to store, tinker, and protect their investments.”

Ted Deits, developer of Eucalyptus at Beaumont Storage Condominiums who joined forces with Gandolfo recently, noted, “The pace of sales, and the value appreciation of these garage condominiums have been spectacular. It made sense that Dave and I joined forces to bring another project to the desert as demand continues to grow, and clients are left wanting more.

“The first phase of sales sold out in a matter of hours last week when we released 15 garages for early reservations,” Deits added. “Seven of the 15 pre-sales came from existing owners at Eucalyptus at Beaumont. The next sales phase will be released on June 1st and we are expecting similar results.”

Construction will be completed by late summer.

Among the most notable features at MonSTORE Garages are the aircraft hangar doors, up to 40 feet or more, making entry and exit easy for those with larger vehicles.

Rather than rent a self storage unit at a facility, storage condominiums give tenants the chance to own their unit instead of renting it. While this is essentially a luxury item for those that can afford it, there are some benefits that do make it appealing.

Since much of the money is received up front in pre-sales, self storage condo facilities are able to offer much more in the way of amenities for tenants. The cost for them all is manageable for the owner to recover since they can be added into the sale price for each unit.

Better security is often included in the sale price as well. Since the majority of a tenants neighbors will be the same people for years, a sense of community tends to develop that helps recognize when someone is there that does not belong.