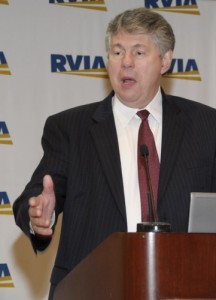 Timed with the Recreation Vehicle Industry Association’s (RVIA) upbeat Annual Meeting last week (Mar. 4-8) in Southern California was the release of an equally optimistic spring forecast from veteran RVIA prognosticator Richard Curtin, who predicts that RV shipments will total 339,600 units in 2014, a “healthy gain” of 5.7% over the 321,100 units shipped last year.

While total 2013 shipments were 12.4% ahead of 2012 in an industry finding its way back to pre-recessionary production levels, Curtin expects conventional and fifth-wheel travel trailers to post 4.7% gains in 2014 with motorized RVs experiencing an accelerated hike of as much as 14.3% in the year ahead.

As a result, the share of total shipments represented by all types of motorhomes is expected to rise another percentage point to 12.9% this year, according to Curtin, an economist with the University of Michigan Consumer Survey Research Center.

“The exceptional 2013 gains in motorhome sales have been due to large gains in home and stock values, which are expected to slow but still be positive in 2014,” reports Curtin. “Importantly, the dollar volume of RV sales will grow much more rapidly than units due to a growing share of motorhomes. Strong GDP gains will strengthen job and income growth in 2014. While the availability of credit is expected to improve, there will be growing concerns about when and how fast interest rates will rise.

At the same time, Curtin, in his spring Roadsigns forecast, recognized the obstacles presented by the winter of 2013/2014, one of the toughest in modern memory.

“Winter weather has rarely had such a large impact on the economy,” Curtin observed. “Work hours were curtailed, shipments delayed and shoppers stayed home. Huddled indoors, RVers experienced cabin fever that they knew would be soon relieved by exploring the great outdoors. Far from crimping RV growth prospects, the cure they sought only reinforced their strong preferences for the RV lifestyle.

“The pace of sales has been temporarily slowed by the frigid weather, and larger bills for home heating will initially slow the pace of the rebound for some models,” he added. “Cabin fever also affected RV manufacturers. Many voiced concerns that other industries would like to have: How and when would they make up the lost production to satisfy growing RV demand. Rather than fret about the weather, forward-looking manufacturers focused on communicating with their customers about how the new features of their RVs could promote comfort and enjoyment — no matter the weather. Pacing production to evolving consumer preferences remains critical. Otherwise, today’s cabin fever will morph into discount fever in the fall.”