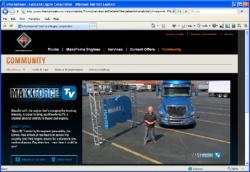 As Navistar International Corp. completes its final testing stages and prepares for the upcoming launch of its 2010 MaxxForce engines, a new online entertainment channel – MaxxForce TV – is making its debut, according to a news release.

Starting this month, customers will be able to learn about the benefits of Navistar’s MaxxForce brand engines — used by several RV manufacturers — in a whole new way with the launch of MaxxForce TV, an online channel devoted entirely to trucks and engines. The inaugural series, “Maxx IQ,” is an entertaining and informative game show hosted by Joe Elmore, host of the television show “Horsepower TV” on the Spike Network.

In each fast-paced segment, Elmore tests the engine smarts of drivers at truckstops and other locations across the country for a chance to win cash and prizes. Online viewers are encouraged to play along to increase their own knowledge of MaxxForce products and hone their skills in case this traveling game show rolls into their town.

The face of Maxx IQ is Nashville’s own Joe Elmore, known to car and truck enthusiasts as the co-host of America’s longest-running performance car show, “Horsepower TV.” Every weekend on the show, he shares engine building tips and visits hot rod and automotive events around the country. Hero to millions of fellow “gearheads,” he’s the perfect fit for a game show that’s all about trucks and engines.

“Joe already has such a great knowledge of engines,” noted Mark Johnson, Navistar marketing communications manager. “We knew he was going to bring a great presence to Maxx IQ. Viewers are definitely going to enjoy seeing him in action — whether they’re watching on their computers, or lucky enough to become contestants.”

“Obviously, engines are one of my passions,” said Elmore. “So it was satisfying to give drivers a chance to win some money and educate them about MaxxForce engines at the same time. During the shoot, I got the opportunity to test-drive the engines myself and they have some real power. I was impressed.”