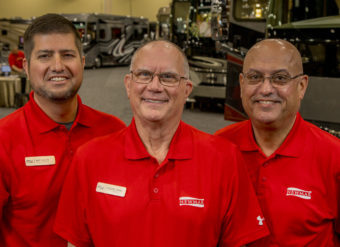 In a stirring ceremony prior to its Dealer Awards festivities, Dick Parks was honored by Newmar Corp. Wednesday (April 18) night as part of the Nappanee, Ind.-based motorhome manufacturer’s 2017 Dealer Meeting. The three-day event concludes today at the Gaylord Texan Resort Hotel & Convention Center in Grapevine, Texas.

With a heartfelt tribute, Newmar President Matt Miller recognized Parks, who is retiring after having spent a long career in the RV industry. He has been at Newmar since 2001, where he has served as president, CEO and chairman of the board. Prior to Newmar, Parks was with Fleetwood Enterprises Inc. from 1983 to 2000 where he was senior vice president of its RV Group.

Miller told RVBUSINESS.com that Parks was “like a second father to him,” citing his calm demeanor, immense wisdom and commitment to always having the customer experience front and center in every decision.

Noting that he made electrical components and cellophane prior to joining Fleetwood, Parks stated, “It was a lot more fun making RVs.” He added, “Newmar has been very special to me. It is a different kind of company. How the company operates is different than most companies. It’s all based on valuing people’s opinions, having a team spirit and making the important things important. It’s not all about making money. It’s about how you treat each other every day.

“That’s been real fulfilling these last 17 years, and especially the last 10 years it’s been a lot of fun,” Parks continued. “We’ve seen a lot of changes, a lot of ups and downs. But the nice thing about Newmar is, whether we’re up or down, we’re going to operate the same way. We’ve got certain things that are important to us – quality and service.”

As for the awards, John Sammut, Newmar’s vice president of sales and marketing, and Matt Utley, vice president of service operations, recognized several dealerships as leaders in sales, service and delivery for 2017. (All award winners are listed in alphabetical order.)