Astride a horse named Pistol, Vice President of Sales and Marketing John Sammut helped get Newmar Corp.’s Dealer Meeting underway yesterday (April 17) at the Gaylord Texan in Grapevine, Texas. (To view a slideshow scroll to the right side of the RVBUSINESS.com home page. Photos by Shawn Spence)

With 100% of its dealer base in attendance, both Sammut and President Matt Miller addressed dealer personnel and thanked them for their partnership in helping the Nappanee, Ind.-based Class A manufacturer enjoy a record 2017. Both pledged their company’s commitment to “Earning It, Everyday,” which is Newmar’s slogan for its dealer meeting that wraps up on Thursday.

Miller told dealers he hopes they share Newmar’s vision to elevate the customer ownership experience so that it is not only the best in the RV industry, but in any industry. He acknowledged the company’s 2017 success, but pledged that Newmar would not become complacent and is “determined to get better in every aspect of our business.”

“In fact, I’m paranoid with our success because I’m afraid it will make us lazy. I’m paranoid that being good will keep us from becoming great. We’re serious when we say we want to be the best, and I’m counting on you to help us both be the best. We will continue to work hard to justify your confidence in us,” Miller said.

Sammut reported that Newmar marked its fifth straight year for Class A market share gain – growing from 5% in 2012 to 9.23% last year. He also commended several Newmar employees, including Michelle Howard, the company’s customer experience manager, and her assistant, Natalie Miller. 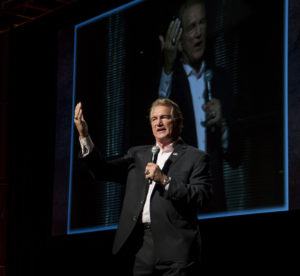 Sammut also provided a lengthy rundown of the 2019 model year product, the details of which are being withheld from the public until May 11 in order to safeguard the remaining 2018 model year orders still in the pipeline.

The evening was capped by a lively, inspiring and often-humorous presentation by Joe Theismann, the former University of Notre Dame and NFL quarterback. After first remarking that, as a former quarterback for the Washington Redskins, it was discouraging to see a big star in the lobby of the Gaylord Texan – the same type of star that adorns the rival Dallas Cowboys – Theismann encouraged dealers to nurture a brand of “integrity, respect and quality.”

Drawing repeatedly on his playing days, Theismann also pointed out that any success he enjoyed was the result of his team, which stands for “Together Everyone Achieves More,” he added. He implored the audience to remember that teamwork is also the reason for their success as well.

“You cannot hope to be a success in life if you think you can do it all by yourself,” he said.