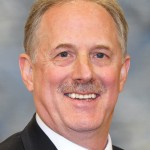 Mark Woody, president of Palfinger North America, Niagara Falls, Ontario, was installed today as the 50th president of NTEA – The Association for the Work Truck Industry.

Woody accepted this responsibility from immediate past president Shawn Jacobs, president and CEO of STS Trailer & Truck Equipment, Syracuse, N.Y., at the President’s Breakfast and Annual Meeting held in conjunction with The Work Truck Show 2014 in Indianapolis.

“I look forward to filling this role and am driven to work hard to lead the NTEA during its 50th year of serving the work truck industry,” said Woody.

Woody has served the work truck industry for 20 years. He began his industry career at Palfinger North America, where he served as director of sales and marketing from 1993-2001. He was then promoted to his current position as president.