NTP Honors Cequent as 2011 Vendor of the Year 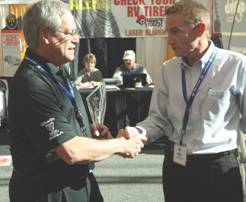 During its 50th Anniversary Conference in San Diego last week, NTP Distribution Inc., a leading national distributor of RV and recreation-related products, honored Cequent Performance Products with the “2011 Vendor of the Year” award, as well as “Best Booth” featuring its Reese, Tekonsha and Bulldog brands. Pictured are Tom Benson, president of Cequent Performance, accepting the “Vendor of the Year” award from NTP President Greg Boyd. To win the best booth honor, Cequent’s staff took full advantage of NTP’s 50th anniversary by creating a rock-and-roll theme and dressing as the “Sgt. Pepper’s Lonely Hearts Club Band” from the classic Beatles album. “While we have fun at these events, we take the relationship we have with NTP and all our customers very seriously,” said Benson. “It’s an honor to be recognized with this award and a privilege to participate in NTP’s success.” Plymouth, Mich.-based Cequent supplies NTP with a several prominent towing brands, including Reese, Tekonsha, Bulldog, Bargman, ROLA, Tow Ready and Draw-Tite.