The 2018 NTP-STAG Expo concluded Tuesday (Jan. 23) with a full day of trade show activities, and by all accounts the two-day event hosted by the RV industry’s dominant national parts and accessories distributor was a solid success.

Noting there was an increase in attendance over last year’s Expo – an exact figure wasn’t immediately available – Bill Rogers, vice president and general manager of Keystone Automotive’s NTP-STAG division, said one of the event’s components dealers seemed particularly pleased with was the “pre-cart” function in which, basically, dealers could start their orders prior to the show.

“I was talking with a guy from Majors RV up in Massachusetts and he was thrilled,” Rogers said. “He’s probably one of the guys who, by the time he gets here to the time it closes, spends the whole day on the floor. At one point he was a little concerned that we took it from two full days to a partial first day before a full second day because he didn’t have enough time to run around. He couldn’t have been happier with the pre-cart option.”

Among those dealers bringing multiple personnel was Mark Rispens, general manager and owner, D&D RV Center in Helena, Mont. He told RVBUSINESS.com that it made sense to include his department managers as they have a front-line relationship with the suppliers and their products, plus the trip serves as a job perk of sorts. 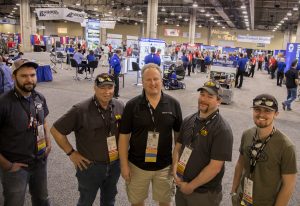 “The show was really good, much better than last year. In fact, we were just talking to a rep about it. The RV Pro training and the supplier seminars were much, much better. It was better quality and more information from the manufacturers and vendors, and the pro trainers that they brought in applied more to what we’re doing,” Rispens said.

In addition to talking with suppliers they already do business with, the D&D crew also canvassed the show for new products and suppliers they might want to learn more about. Toward that end, Rispens said they “stumbled on some cool new products that we didn’t know about, so we definitely found some new things to bring in and some new things to talk about with people.”

“The only real complaint I’ve got is – and I know a lot of people will slap me for this – but it’s a little too short. We had a hard time getting through everything and taking the time that we wanted to in a lot of the booths just because there’s quite a bit of stuff in here,” he added.

Suppliers told RVBUSINESS.com they, too, were very pleased with The Expo, noting a great amount of dealer traffic as well as a general feeling of optimism – backed by orders – regarding the 2018 selling season.

Bobby Raatz, who was recently promoted to director of sales, mobile power and electrical safety, at Southwire Co. LLC, said he was very pleased with the show, especially the caliber of conversations with dealers. 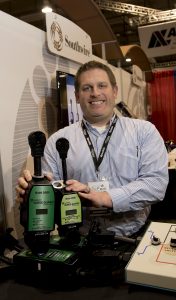 “It’s been a very positive show. The opening night was really, really busy and today’s been a pretty steady day as well. So overall very productive, a lot of good feedback, a lot of good conversations and hopefully the orders keep coming in,” Raatz said.

Echoing those comments was Elden Wood, vice president sales, service and marketing of Carefree of Colorado, who added that what he was most encouraged by was “the level of enthusiasm that the dealers have for the upcoming season.”

“I think it’s very encouraging how optimistic they are for the industry overall and the customers that they’re seeing coming in through their doors,” he said.

When asked whether business was brisk during the day-and-a-half trade show portion of the Expo, Wood explained that it was premature for an exact accounting, but based on dealer interactions alone he’s expecting a positive outcome.

“The conversations that we’re having in the booth and the reception to our new products that we’re introducing here has been quite good, but as far as sales it’s a little bit too early to say,” he said. “You can make some estimations and whatnot, but overall that’s where we rely so heavily on the direct interactions with the dealers and getting their feedback on what their thoughts are for the products and things like this, which again for us has been very, very positive.”

Rosie Hirsch of RV Lifestyle Inc., a manufacturers representative firm, and owner of Camp Casual, an RV accessories company with a popular line of retro RV-inspired dishware, said the show was “phenomenal.”

“We’ve done really, really well. As an RV rep, we have many vendors here that we represent including Park Power by Marine Co., Progressive Dynamics, Walex, StarBright, Swagman – a lot of others – and they all have done very, very well,” Hirsch said. “Traffic has been quite busy and we’re very pleased. We also have a company called Camp Casual, which I own, and we’re three years new in and business has just been unbelievable. As a trajectory, we’ve been extraordinarily busy. Our booth has been filled most of the show.”