OEMs are Expanding, But Staffing is a Challenge

Editor’s Note: The following article by Jeff Kurowski, Recreation Vehicle Dealers Association (RVDA) director of industry relations, examines the ongoing expansion in the manufacturing sector and the resulting challenges with regard to staffing. The piece appears in the January issue of RV Executive Today. 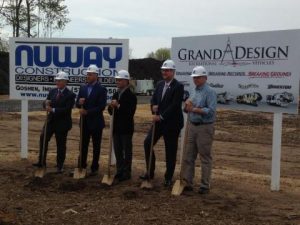 Five RV manufacturers either have, or will soon open new factories to build more units to satisfy the robust consumer demand for their products. However, particularly in northern Indiana, staffing those new facilities could be an issue.

Four of the five expanding manufacturers are in the towables sector, while the fifth—Airstream–builds both motorhomes and travel trailers.

Airstream, a Thor Industries Inc. subsidiary located in Jackson Center, Ohio, will add 50,000 square feet to an existing facility to expand its R&D operation, although some additional manufacturing space will also be added.

Airstream, which employed 710 people as of last November, will increase its labor force to around 740 people by the end of 2017, according to the company.

Lance, based in Lancaster, Calif., bought a 61,000-square-foot factory building to increase its output so it can supply its dealers in a timelier manner. “Thanks to our dealers’ orders, our current lead time is stretching into April,” said vice president of operations Jeff Souleles in November.

The building acquisition will give Lance’s lamination department “much needed elbow room while freeing up space in our existing building for other purposes,” Souleles said. “This allows us the unique opportunity to increase both our focus on new and precise machinery, while stimulating new job opportunities to ensure we utilize those machines to maximize efficiency and cut down lead time.”

Two of the manufacturers expanding in northern Indiana, where qualified labor is extremely scarce, are business units of Thor, while a third, Grand Design, recently was acquired by Winnebago Industries Inc.

The new Open Range factory will replace a smaller leased facility on the south side of the LaGrange County village. Shipshewana is at the fringe of the Elkhart labor market, about 25 miles east of the city.  The move will double Open Range’s output capacity and create about 65 new jobs.

Grand Design, which was acquired by Winnebago in November, opened a new factory in Middlebury the same month. The new, 110,000-square-foot plant is dedicated to building the company’s Imagine brand lightweight travel trailers. Grand Design has built more than 4,000 Imagine units since it was introduced in September 2015, and the new factory will allow for a 75% increase in production, said Micah Staley, general manager for the Imagine and Reflection brands.

Meanwhile, Keystone, Thor’s highest volume towables builder, broke ground in November for two new plants in Goshen where more RVs are built than in Elkhart. The two factories will total 200,000 square feet and are scheduled for completion during the first half of this year.

When fully staffed, the new Keystone plants will add 250 to 300 people to Keystone’s northern Indiana labor force, which totals about 4,800 people. The company, which builds 24 different travel trailer and fifth wheel brands, did not reveal which brands it plans to build in the new factories.

The factory expansions are occurring in spite of the fact that the labor shortage is the hottest topic of discussion among Indiana and Elkhart County business and political leaders. For example, Gregg Fore, president of Elkhart-based supplier firm Dicor Corp., told the Indianapolis Star that only one out of every 10 job applicants he sees is qualified, despite Dicor’s offering premium health care benefits and competitive wages.

Elkhart County Economic Development Corp. President Mark Dobson also has said there are 20,000 more jobs in Elkhart County – which has a total population of around 200,000 — than workers to fill them.

The situation is exacerbated by the fact that there are fewer immigrants coming to the area. Census Bureau data show that there were almost 5,000 immigrants in Elkhart County between 2000 and 2005 – prior to the Great Recession– compared with less than 700 now.

One  possible solution is to recruit recently discharged military veterans who have ties to Indiana, said Ron Breymier, executive director of the RV Indiana Council (RVIC), which plans to launch such a program soon.