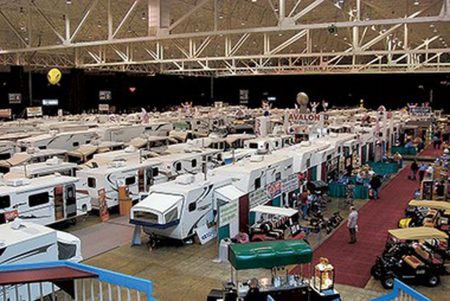 The 44th Annual Ohio RV Supershow, touted as the largest indoor show in the country, took place Jan. 8-12 at the International Exposition Center in Cleveland featuring 12 of the top RV dealers in northeast Ohio and more than 600 of the latest RVs.

New London, Ohio-based Camp Life RV, made its initial appearance at the event and officials offered positive reviews. “This was our first year,” said Shelley Pellerian, sales manager at Camp Life RV. “Our owners  just bought the campground and RV dealership in August, but they were very impressed and thought the show seemed well attended.”

Jennifer Radel from All Seasons RV noted, “I would say the attendance was definitely higher. They did a new half-price on Wednesday and Thursday, so I know our numbers were up for sure on those days.”

Notably, Radel reported that attendees were in a buying mode. “About half of the people there were ready to buy,” said Pellerian. “I know we sold seven units.”

A discounted admission price was a new addition to the Supershow along with a military tribute where attendees could sign or color a huge mural in support of the 3D Battalion 25th Marines based in Brook Park, Ohio. The mural was presented to the marines at the end of the event.