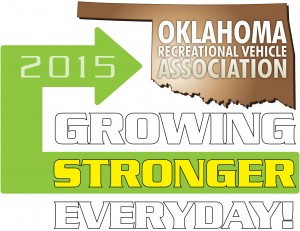 Despite a winter storm that canceled the golf tournament and presented travel difficulties for many, organizers said the Oklahoma RV Association’s 2014 State Convention, held Nov. 15-18 at the Hard Rock Hotel & Casino in Tulsa, was regarded as a success by all who participated.

Presented under the theme of “2015-Growing Stronger Everyday!” as a nod to the current state of the RV industry, the 2014 ORVA convention provided an impressive agenda of business programs designed to educate and assist its dealer and associate attendees for business ventures in 2015, according to a press release.

In addition, Ron Walker of Leisure Time RV in Oklahoma City was elected ORVA chairman during the convention. Walker, who succeeded Jim Dickson of Hunter RV Center of Sapulpa (Tulsa), said the state convention was “the best we’ve ever had.” He said the speaker lineup was fantastic and all attendees reported an enjoyable, educational convention.

“It’s an exciting time for us. We’re pretty blessed here in Oklahoma. Business has been pretty good even through the recession. Going forward, all signs are positive and we think it’s going to be that for a while,” Walker said.

In honor of this year’s theme, the ORVA joined with the Arbor Day Foundation to recognize each attending Oklahoma RV dealer by presenting them with an Eastern Redbud seedling tree, the official state tree of Oklahoma. “We felt that the tree symbolizes the current and continuing growth of not only ORVA, but of the RV Industry as a whole,” explained Vergara of RH Power & Associates and ORVA executive director.

Although the Sunday golf tournament had to be canceled due to freezing temperatures, snow and high winds, the convention kicked off with a spirited reception welcoming attendees.

In one of his final actions as ORVA president, Dickson opened the convention’s business agenda on Monday which featured notable speakers and various presentations throughout the day. Topics included state of the union addresses by Richard Coon, president of the Recreation Vehicle Industry Association (RVIA), and Phil Ingrassia, president of the Recreational Vehicle Dealers Association (RVDA). Coon returned later for a special presentation to kick off RVIA’s new “Technicians In Training” program to be made available to Oklahoma RV dealers in spring 2015. 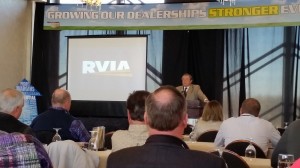 Other presentations included a perspective of the RV industry from the manufacturing side by Forest River General Manager Doug Gaeddert, advanced social media strategies by Sheril Vergara of RH Power & Associates Inc. and ORVA executive director, and state legislative and titling issues with a panel including Roy Dockum from the Oklahoma Motor Vehicle Division. The session then wrapped up with a keynote address by Tim Connor, who spoke on creating passionate customer connections and customer-focused sales strategies as well as dealership management techniques for success.

The convention capped off Tuesday with Connor’s presentation focusing on dealership management, titled “Success is a Decision,” which was followed by the ORVA’s annual business meeting. In addition to electing Walker as president, the annual meeting included plans for ORVA’s 2015 convention along with electing Kim Siex of Bib Hurley RV in Tulsa as ORVA’s new vice president. The secretary and treasurer positions will remain the same with Stephanie Pierce of Dave’s Claremore RV in Catossa as secretary and Jan Motley of Motley’s RV Repair in Oklahoma City as treasurer.

“This year’s convention was a huge success thanks to our generous sponsors and donors as well as the successful silent auction and 50/50 raffle, all of which combined to raise funds to ultimately offset the convention costs,” said Stephanie Pierce.