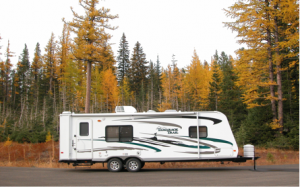 Outdoors RV Manufacturing, LaGrande, Ore., announced the first production shipment of the Tamarack Trail travel trailer. The Tamarack Trail 260RKSS  is the perfect example of the next generation of RVs being looked at by today’s consumers, according to a news release.  Due to five-sided aluminum framing and lightweight steel roof trusses, this 29-foot travel trailer weighs in at just over 5,000 pounds fully equipped. The Tamarack Trail product line starts with floorplans just under 17 feet and 2,145 pounds. dry weight so they can be towed by a variety of today’s smaller tow vehicles.