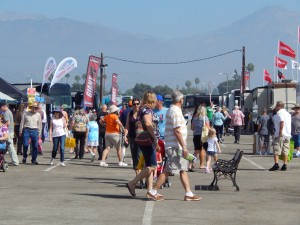 Attendees check out product and events at the Pomona Show

Amid a recovering Golden State economy, the Recreation Vehicle Industry Association’s (RVIA) 62nd Annual California RV Show at the Fairplex in Pomona saw an 8% increase in attendance during its first weekend.

”The economy in California is starting to see the improvement that other states already have seen,” said Tom Gaither, RVIA’s western show director. ”We got hit pretty hard out here during the Great Recession. But the value of homes is rising, the unemployment numbers are going down and peoples’ portfolios are recovering.”

”The opening weekend shows that the California market is back,” said James Ashurst, RVIA vice president of communications and marketing. ”The industry in general had a tough time recovering from the recession, but California was particularly hard hit.”

”Those three did well,” Gaither said. ”There are a lot of people who like the fact that these B’s are built on the Mercedes-Benz (Sprinter) chassis. A lot times, it’s mom and pop who want a smaller RV on a nice chassis and want to go out and visit the national parks.” 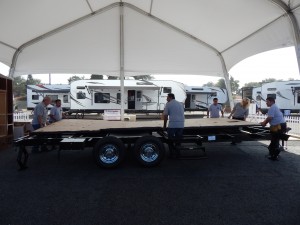 “People who are active in the RV community — manufacturers, dealers and campgrounds — have said a spring show is something they’ve wanted to do for years,” Ashurst said. ”Coming out of the downturn, it’s something the RVIA Show Committee has been recommending for years. The success of the fall show is what is behind the April show.’’

Audiences were drawn to former Los Angeles Dodgers stars Ron Cey and Steve Garvey along with basketball player A.C. Green from the Los Angeles Lakers who appeared over the weekend.

Genesis Supreme, a new RVIA member based in Perris, Calif., which is building a toy hauler from scratch at the show, also drew a good crowd. ”They started with the chassis and have the sidewalls up and the basic cabinets already are in,” Gaither said.

Gaither was particularly surprised that 74 out of 80 people who attended a seminar by Dave ”The RV Handyman” Solberg said they intended to buy an RV at the show. ”That was kind of shocking,” Gaither said.

Next weekend’s entertainment will include rocker Bret Michaels, an avid RVer, who will appear on Saturday.