By: RVBusiness|Published on: May 15, 2015|Categories: Today’s Industry News| 0 comments 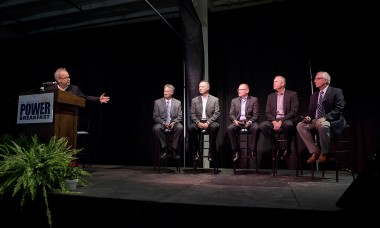 Members of the group chimed in on a variety of questions, including such topics as the push for elevating the minimum wage (all said a minimum wage hike wouldn’t directly affect their operations since, for competitive reasons, they had virtually no positions at that wage level) and whether a workforce shortage in northern Indiana is prompting expansion elsewhere. But by far the query that elicited the most interest concerned the ongoing debate over the viability of the three key trade industry events now on the calendar.

All said they participate in the RVDA Con/Expo, but answers focused on the Open House and the Louisville Show – the two main venues for introducing new product to dealers – and whether there was a need for consolidation.

“It’s up to each manufacturer,” Potts said. “I can’t see a group this large coming together on a certain format or timing for that. Winnebago has decided that we display product on a large scale two times a year. We do it at the Louisville show in the winter and we do it at our dealer show in the spring.”

While acknowledging the company’s towables division does exhibit units from its Middlebury facility, Potts said Winnebago sees the Open House as more suited for its Indiana competitors.

“From our perspective, we love it. I think most manufacturers love it. I don’t see the Open House concept doing anything other than getting bigger and more important. Certainly from our company’s perspective, we value it and love it and we’re going to continue to nurture that,” Rank said.

He added that Forest River does a good business at Louisville and will continue to support the show, but he pointed out it “does have a challenge in that they need to provide more value” to manufacturers, suppliers and dealers. “If that show stops bringing value to its customers, then maybe there is a time and a place for something to evolve there. But I don’t think that’s in the foreseeable future.”

Clark said the situation will sort itself out because the “dealers are going to vote with their presence.” He also expects the Open House to continue to grow and eventually will include suppliers as well as manufacturers.

With regard to the timing of the the three major trade shows, Clark noted, “Frankly, it’s busy. You’ve got Open House in September. In October you’ve got RVDA and then Louisville right around the corner in December. It’s a busy, busy time for the dealers and manufacturers.”

Martin said Thor has a unique perspective because many of its companies are located in northern Indiana and the Open House is “huge and will continue to grow.”

“The Louisville show? We’ll continue to support it,” Martin said. “It is a little different because our presence is much bigger here at the Open House and we’re very successful. I think Don’s right: the dealers are going to approve by their attendance as the future goes on.”

Bontrager, who added the Pomona, Calif., and Hershey, Pa., consumer shows into the “busy” schedule, agreed that dealers will “vote with their feet and manufacturers are going to vote with their wallets.”

That said, being the RVIA chairman puts him in a position to positively affect the Louisville show, Bontrager added. “We just need to continue to figure out a way to add value and give people a reason to come and be excited about it,” he stated. “I’m not going to make a prediction as to what’s going to happen, but I think something will evolve at some point in time.”

Panelists were somewhat divided on whether a workforce shortage in northern Indiana is prompting expansion elsewhere. Clark and Bontrager stated they intend to continue to grow operations at their northern Indiana headquarters but others, including Potts and Rank, said lack of available workers is a primary concern.

“In Iowa it’s very serious. We anticipated we’d be able to achieve pre-recession employment levels and it looks like we were wrong,” Potts said, adding they topped out at about 70% of those employment estimates. “It’s turned into our No. 1 challenge now. It’s restricting our capacity. I think you’ll see us doing what you’re seeing others doing and that’s reaching out beyond the labor draw of north Iowa into other areas to tap into more labor resources.”