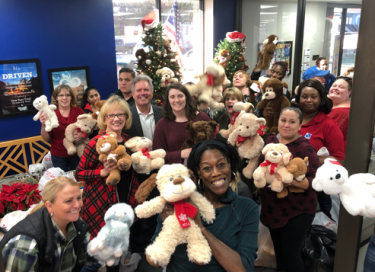 Texas-based PPL Motor Homes recently collected over 450 teddy tears during their annual “Cuddles for Kids” toy drive. According to a press release, local first responders give the bears to children involved in accidents or affected by domestic issues.

“We started Cuddles for Kids in an effort to help children facing difficult situations” says PPL President Diana LeBlanc. “Every year with the support of RVers across the country, PPL provides hundreds of teddy bears to police officers to keep in their patrol cars. The bears are given to young children when they’re needed most, and often become the child’s best friend.”

Since beginning in 2011, PPL has collected and distributed thousands of teddy bears to area law enforcement agencies. Donors from across the U.S. contributed to the 2019 drive, either by dropping off bears or sponsoring them. PPL friends and family can drop off bears at all PPL locations year-round.

“We are so thankful for the many people who’ve generously donated bears and other resources to make Cuddles for Kids so successful” LeBlanc says. “And we’re especially grateful for these heroes in blue who are there to protect the most vulnerable members of our communities.”