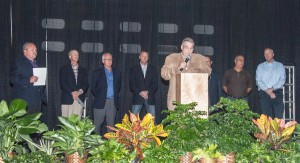 B.J. Thompson of Bj Thompson Associates, who facilitated the event along with RVBusiness, told the audience of RV manufacturers, suppliers and media members that the four-day Open House was started by Forest River Inc. President Pete Liegl during the recession as an informal gathering for its dealers to see new RV models for the upcoming year.

“It has since exploded into a regional trade show that now boasts nearly 60 RV manufacturer and supplier displays and draws more than 4,000 attendees from RV dealerships across the U.S. and Canada to Elkhart and the surrounding communities,” Thompson said.

Moore said the city of Elkhart and its residents recognize the RV industry as “our” industry.

“Wherever we go, people find Elkhart and RVs to be synonymous. I answer with pride, ‘Yes. That’s us. That’s what we do,’” Moore said “Then their next comment is, ‘Mayor, can you get us a deal?’ But I’m not in sales. I’ll leave that up to you.”

Hannon mentioned how difficult it is to get a restaurant reservation during Open House week, but quickly added that was a good problem to have.

“You play such an important part to our economy,” Hannon said. “But it goes beyond the 30,000 jobs and the $1 billion payroll. It’s also the pride that you bring. I think this week, when the dealers are here, we’re going to see a concentrated look at what you all mean to the industry locally.”

Lucchese, whose Lucchese’s Italian Restaurant will undoubtedly enjoy good business this week, said as a small business owner he certainly appreciates all the RV industry has meant for the area.

“This is one of our busiest weeks because of you guys,” Luchese said. “There’s not a family out here that’s not touched by this industry. We just want to say thank you, keep growing and thanks for helping us out.”

Fore, the immediate past chairman of the Recreation Vehicle Industries Association (RVIA), said the economic impact of this event is “equal to a 100 new jobs brought to this county, and we’re doing it all in just three days.”

Terlep acknowledged the “vision” of his boss, Pete Liegl, in starting the Open House seven years ago during the recession.

“He had an idea to invite our customers here during some times that weren’t the greatest of times,” Terlep said. “But over the past six years, this event has grown into more than just a dealer show for our company. It’s become an industry event that’s an absolutely wonderful thing, not just for our company, but for the industry and the community that we all live in and work in.”

Martin echoed Terlep’s comments, saying Thor and other manufacturers followed Forest River’s lead in participating in the Open House. Martin, looking around the warehouse space full of mostly Forest River employees, said despite the competition between the manufacturers he considered everyone a friend.

“Have the best week possible — just save some for us down at the end of the road,” Martin said, referring to Thor’s location at the RV/MH Hall of Fame.

Bontrager, who was introduced by Thompson as the perhaps the next chairman of the RVIA, said the Open House has “grown a life of its own.”