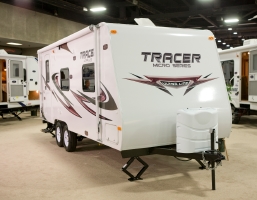 A 70,000-square-foot plant in Prime Time’s Wakarusa, Ind., factory complex will be outfitted for fifth-wheel production during a Dec. 24 to Jan. 3 holiday shutdown.

”We are very excited about the upcoming season,” said Prime Time President Jeff Rank. ”Dealers at the show were very, very upbeat — more so than I’ve seen in the last year or so.”

The Crusader will feature floorplans in the 25- to 29-foot range weighing between 6,000 and 7,000 pounds that can be towed by half-ton pickup trucks

The company currently has about 100 dealers and employs 75 people with plans to manufacture seven units a day after the first of the year, according to Rank. He added that Prime Time’s work force is expected to double in the next four or five months.

”Dealers were not only willing to buy, they were able to buy,” Rank said. ”With inventories very low, I think the banks (that finance wholesale floorplans) wanted to get inventories in line.”

Rank said he senses that retail lending on a national level is still a problem for the RV industry.

”A lot of dealers have built relationships with banks at the local level,” Rank said. ” That added to the sense of optimism. But it’s apparent that there are still some concerning about national retail financing.

”Nobody’s kidding themselves that the market is going to return to what it was a few years ago, but there are going to be some nice recoveries for some dealers out there.”