Production Wraps on RVB's 'RV Of The Year' Show 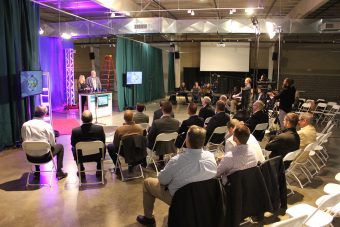 With representatives of the finalists and overall winner on hand, filming of the “2018 RVBusiness RV Of The Year Awards” show by “Rollin’ on TV” took place today (Jan. 9) at the RV/MH Hall of Fame and Northern Indiana Event Center in Elkhart, Ind.

This is the third year that RVBusiness and “Rollin’ On TV” have partnered in producing this special event showcasing the top five finalists as determined by the staff or RVBusiness magazine as well as the ultimate “RV Of The Year.”

The finalists included the Newmar New Aire, Starcraft GPS, inTech Luna and Forest River No Boundaries while the overall “RV of the Year” was the Winnebago Horizon.

This year’s show, co-hosted by ROTV’s Jeff Johnston and Colleen Bormann, news anchor for WBND ABC 57 in South Bend, Ind., is scheduled to air starting Feb. 11, and can also be seen on streaming media through ROTV’s various stations as well as the www.rollinontv.com and www.rvbusiness.com websites.

RVBusiness magazine has been handing out this coveted award for seven years, but it was mainly an inside-the-industry award until about five years ago when RVBusiness Publisher Sherm Goldenberg and ROTV Executive Producer Jose Moniz decided to extend the show’s reach to millions of households nationwide to raise consumer awareness.