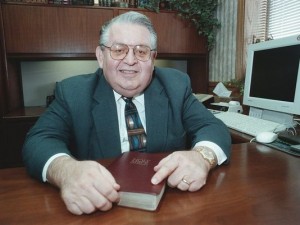 Raper died at about 11:15 p.m. in Fort Lauderdale, a friend of Raper’s told the Palladium-Item.

Over the years, Raper dropped the cars and added tent campers, travel trailers, motor homes and manufactured homes to his inventory, eventually creating what he called the largest RV dealership in America.

Raper invited David Bane, a Richmond native, to leave a banking job in Cincinnati to join the RV dealership as general manager. When Raper decided to retire, he sold the dealership to Bane, with the sale becoming final in June 2002. The sale of the dealership to Camping World was finalized in recent weeks.

In January, Raper said the sale to Bane was “meant to be” and he wished Camping World well with the purchase of the dealership.

In a statement, Camping World Chairman and CEO Marcus Lemonis noted, “Camping World and Good Sam would like to offer our deepest condolences to the family, friends and customers of Tom Raper RV on his passing last night. We have recently partnered with the RV dealerships that he proudly founded and consider ourselves a part of the extended community that now mourn his loss. Mr. Raper has left a significant mark on the RV community and industry and we appreciate and honor his legacy. ”

Tom Raper RVs was not just a Richmond staple, but a Midwestern landmark known to many from the jingle in commercials that urged customers to “save today the Tom Raper way” at its Richmond location on Williamsburg Pike at Exit 149A.