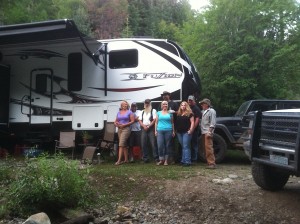 Some of the crew, friends and family of the new "gold mine" reality TV series. Talent Larry Overman is second from left.

According to a press release, Larry Overman heads up the six-part series which is being filmed now at the Crescent Mine (formerly named the Buckeye Mine) near Sumpter in eastern Oregon. The Buckeye Mine was once one of the most productive gold mines in the United States, but is rumored to be inhabited by ghosts and was shut down in 1957. Overton and his crew will attempt to reopen the mine on the show.

“We were looking for a roomy, rugged camper we could use both as living quarters and as a meeting location/headquarters,” Overton said. “Of the many RVs we considered the Fuzion toy hauler is absolutely the ideal vehicle for our use. The huge garage comfortably accommodates the whole crew during our daily planning sessions, and the living quarters are spacious and luxurious for me and my family. Once we saw the Fuzion my wife and I knew this was the camper for us.”

“Partnering in this network television series provides us with the opportunity to showcase the Fuzion to millions of weekly viewers,” said Keystone Fuzion Product Manager Tim Markel. “Fuzion is designed for the active lifestyle, for people who get out and enjoy the outdoors but who also value the comforts and quality we build into each coach. Larry and his crew of miners will definitely put the Fuzion to a test. We have no doubt Fuzion will pass with flying colors.”

The Fuzion being used on the show is a 398 floorplan with 14-foot garage, built-in picnic table, 20-foot patio awning, generator and extra large refrigerator. The triple-axle trailer will be set up as base camp at 5,400-foot elevation, miles from civilization.