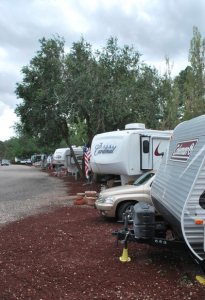 Full sites, like these at J&H RV Park in Flagstaff, Ariz., have been common this year across North America (photo by Jeff Crider).

Editor’s Note: The following story appears in the October issue of Woodall’s Campground Management, sister publication to RVBusiness, offering a detailed look at the campground industry’s welfare during 2014. Editor Justin Leighty speaks with numerous players in the sector, who report that it’s shaping up to be a banner year. For the full story click here.

It has been a good year so far for campground and RV parks in the Midwest.

And in the western U.S. And the northeast, and in snowbird havens, and, well, all around.

Last winter was good for the snowbird parks, and for the northern tier, the summer finished off more than making up for a late start. Not only that, most early indications are that it’s going to be a good fall shoulder season all around and another strong winter for most snowbird parks from Florida to California.

Coming out of the summer season, Matt Rose of the Recreation Vehicle Indiana Council said that across his Midwestern state, “it’s been really good. Most of the campgrounds that I’ve talked to this summer are having better years than they’ve ever had. They’re happy and doing well.”

For instance, Rose said that at one campground, it’s been a multi-year upswing. “Last year they saw a 13% increase from 2012 to 2013, they’re on par to match 2013’s numbers and maybe even eclipse last year’s numbers,” Rose said.

In Texas, “It was actually a really good summer for a couple of reasons. We ended the spring season and started off the summer season with some rain which is really refreshing. Our rivers and our lakes came up quite a few feet, and that helped essentially all the parks that were located on water,” explained Brian Schaeffer, executive director of the Texas Association of Campground Owners. “Our summer here has been much cooler than in previous years. It really seemed to encourage folks to get out and camp. From that standpoint we did well.”

In addition, Schaeffer told Woodall’s Campground Management, “overall the economy in Texas is just screaming hot. We had a lot of folks coming in on projects, on work, a lot of our parks had seasonal workers in them. We kind of have a shortage of houses here, so as people are moving to the area, they’re staying in campgrounds until they can either buy or build a house. We’re up not only for weekends, but monthly,” Schaeffer said.

“We had a board meeting recently and we have campgrounds from all around the state, and in talking to the park owners, everything is their bookings, their summer numbers were up about 10 12%,” he said. “Truly we are blessed. Business is good. Even this time of year with school back in session, parks are full,” Schaeffer said.

When 105 members of the Northeast Campground Association (NCA) gathered in Vermont for this year’s Great Escape, they were pleased with the just-ended summer, said Cyndy Zbierski, executive director of NCA, which encompasses the states from Maryland to Maine. “Around the NCA board table with each of our reps as they gave their state reports, they were all a resounding, ‘This was a good season,’” she said.

“We talked about a strong Canadian market in many states and a wonderful new European market growing in several states. There was mention of a growing group from Latin America and from the Indian population absolutely loving camping,” Zbierski reported.

“Maryland enjoyed a great summer season. They had a very good season.

Pennsylvania, they were boasting a strong camping season. It was a wonderful conversation,” Zbierski said.

“It’s been a real good year and a good summer for most, better than normal. It’s slower than the rest of the year but for summer it’s been good for us,” Cornwell said. “Overall business has been good.”

“Some of our members are reporting significant year-over-year gains in occupancy,” said Jo Ann Mickelson, executive director of the Arizona Association of RV Parks & Campgrounds, in a written announcement. One Flagstaff-area park saw bookings through the summer up from 8% to 12% and expects to end 2014 about 5% to 7% ahead of 2013. Another northern-Arizona park reported a 17% increase for the first eight months of the year, according to the Arizona association, while other northern-Arizona parks saw summer business on par with last year.