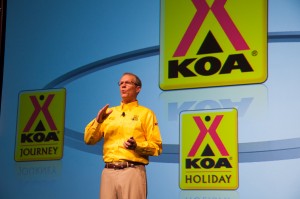 Kampgrounds of America Inc. (KOA) set a new record for revenue in 2012, and enjoyed its second-best year ever in camper night growth since the company began tracking all of its locations on a centralized reservation system in 2005.

According to a press release, short-term camper nights in 2012 at the nearly 490 KOA campgrounds in North America increased by 3.3% over 2011 final figures. Campground registration revenues were up nearly 6% over 2011.

“It was a good year for camping,” said KOA President Pat Hittmeier. “We added 18 great new camping locations in some wonderful spots, and our campers proved, once again, that they love the camping lifestyle and they love KOA.”

The Billings, Mont.-based company reported that results were strong in nearly all areas. KOA’s Value Kard Rewards program, which now has 351,000 members, experienced a 7.5% increase in card sales in 2012.

KOA’s deluxe cabin program also continued to grow in 2012 as camper nights were up nearly 21%. A portion of that growth was driven by the addition of nearly 250 new deluxe cabins at KOA campgrounds. In total, the KOA system now has more than 2,100 Deluxe Cabins at more than 300 KOAs in North America.

Even use of the traditional log KOA cabin, first introduced into the KOA system in 1980, saw growth in 2012. Basic KOA cabins have electricity, but no kitchens or bathrooms.

“We saw a 2.5% growth in the use of our basic KOA cabins in 2012,” Hittmeier said. “That’s particularly interesting, in that we really haven’t added more units to our 4,500-unit inventory of those cabins. That growth was driven strictly by increased use by campers.”