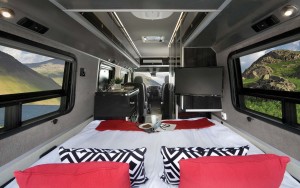 The company has continued its trend of clean and sleek lines on the exterior of the TS and also introduced some newly styled ground effects that will make its way across all Mercedes-Benz models this year.

Stepping inside the TS, Roadtrek’s floorplan is appointed with rich interior colors, accents and fabrics. Exclusive to the TS Adventurous is the charcoal interior cabinets with subtle hints of gray throughout and accented with chrome pieces to create an upscale, trendy look.

Also being showcased in the TS Adventurous is Roadtrek’s interactive Coach-Connect system, providing RVers with full control of critical functions even if they are not near the coach. Using the tablet interface, RVers can connect via any desktop, tablet or cell phone, and monitor coach features such as tank fluid levels, lighting, air conditioning and heating, awning, battery power and more.

“We are thrilled to have the TS Adventurous officially become part of the Roadtrek lineup, it is a coach that showcases everything Roadtrek stands for and where the company is headed,” stated Jim Hammill, Roadtrek president. “Enthusiasts buy Roadtrek because they expect and deserve the best and that is exactly what we are offering in the new TS Adventurous, it’s a touring coach like no other.”